It’s been an exciting few months. Just to prove that I have actually left the house, here are some photos from recent travels:

At the end of April, I spoke at several Rest in Pieces-related events in New York. The first was at Observatory in Brooklyn, co-presented by the wonderful women of Morbid Anatomy and Phantasmaphile. I took advantage of the Morbid Anatomy space to snap a few pictures with some very early–or very late?–guests. Thanks to all who showed up!

Burial registers at the cemetery–you can bet I was itching to pour through these: 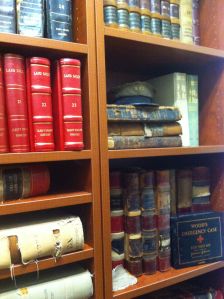 Afterward, Jim of Sleepy Hollow invited us to join one of their “Murder and Mayhem” tours through the cemetery, which I highly recommend. Wandering through a cemetery with lanterns at dusk was one of the lovelier experiences of my recent memory. Unfortunately, it was hard to take good pictures with my iPhone, although this captures some of the experience (the grave is of a famous abortionist):

My favorite stop was the Bronze Lady, a sculpture who supposedly figures in some complicated local high school graduation rituals: 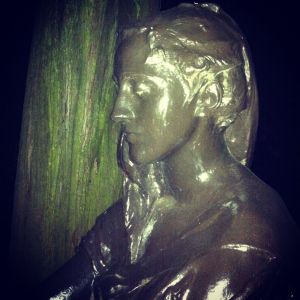 The last event in NYC was a reading at Green-Wood Cemetery in Brooklyn. The place was just gorgeous, with fruit trees all in bloom around the graves. Driving up to the chapel in full sun was a sight to remember. Of course, the only good photos I got were inside. Here’s me with Carrie Schaff, a friend and editor type from Feral House/Process Media:

Here’s the one good photo from outside Green-Wood. Do I look bored? I definitely was not bored. That’s just my face. 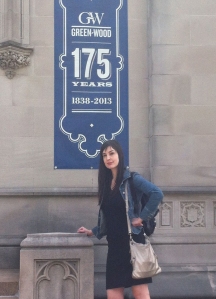 A few weeks later I flew to San Francisco, where I was delighted to appear with the singer/songwriter Jill Tracy at an event for Obscura Society SF. (I also did a fun interview with Atlas Obscura to promote the event here). It was such a pleasure to meet Jill, Annetta from Atlas Obscura, and many others. Jill played a few songs that she composed while spending the night at the Mütter Museum, which I can’t even imagine doing. Here she is performing with the museum projected over her: 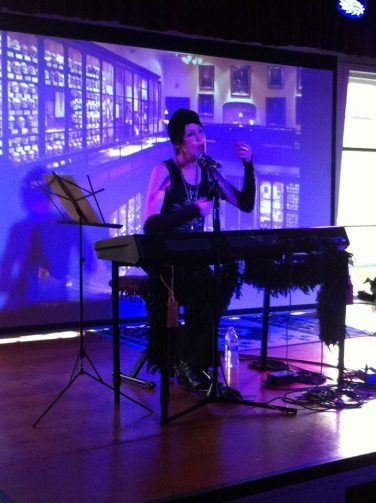 Judging from the audience response, the highlight of my talk was the part about Rasputin’s penis. I won’t post that picture, but here’s one of Rasputin’s daughter on a Wheaties box. (This is stolen from an eBay listing that has since sold.)

Another highlight of the San Francisco trip was exploring the giant necropolis of Colma with Colin Dickey and his wife Nicole Antebi. (I’m not sure why I look like I’m running away here.) 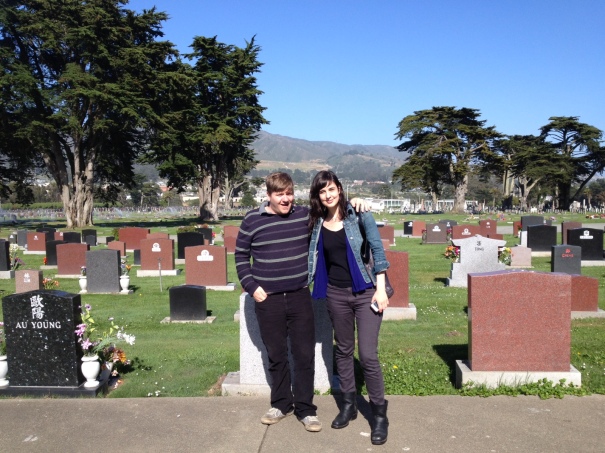 Hours before our visit, I discovered that I have a relative buried in Colma, a sea captain named Simeon Bartlett Kinney. Here he is:

I’m thinking his beard would be an inspiration to the young men of Brooklyn.

Simeon B was buried in San Francisco’s Masonic cemetery, which was dug up at some point and the graves moved to Colma. (All of San Francisco’s graves were dug up and moved to Colma when the city ran out of room for graves in the early 20th century.) My father had researched Kinney and discovered that his grave had been moved to Woodlawn Memorial Park in Colma, conveniently enough the first cemetery we came across in the city. I braved the records office, where three helpful young ladies in black suits informed me that all the bodies from the Masonic cemetery had been buried in a mass grave at the back of the cemetery. They were relieved at how calmly I received the news, and I wanted to say “Hey, some of the most famous people in history ended up in mass graves!” Nevertheless, I may have shouted “mass grave!” with a little too much glee when I left the office to share the news with Colin. 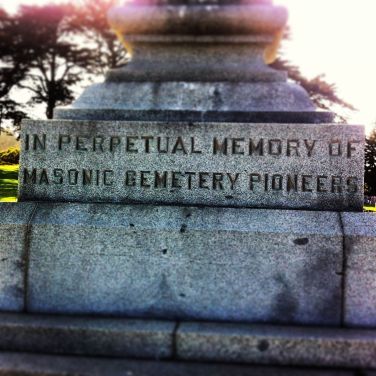 Two strange big cats were flanking the monument, so of course I made friends. These guys didn’t look like normal cemetery art to me. Perhaps they’re rejects from a Disneyland ride?

Thanks to all who came out, let me crash at their house, showed me around, and cared about my odd little book! Let’s do it again soon, huh?