Back in April and May, I spent a lot of time in Seattle’s Lake View Cemetery. If you’ve heard of it, chances are it’s as the place where Bruce and Brandon Lee are buried. But it’s also home to the remains of many of Seattle’s pioneers, and it’s a stunning hilltop from which you can see both the Cascades and Olympics on a clear day. Aside from the fact that a beautiful cemetery is an ideal place to practice social distancing in a pandemic, I went because I wanted to find the grave of Mother Damnable.

Mother Damnable, born Mary Ann Boyer in 1821, ran Seattle’s first hotel, the Felker House. Among other guests, she hosted the territorial government—and, by many accounts, ran a brothel. She supposedly earned her sobriquet because of her fondness for cursing (in multiple languages!), although there’s also a tradition of witches and madams named “Mother Damnable” elsewhere. But our local Damnable really earned her place in weird Seattle history because of a story about her corpse. When she was dug up and moved out of the old Seattle Cemetery in 1884, the papers said her still-smiling body had turned to stone. I wrote up the whole tale for The Stranger, America’s hometown newspaper, back in 2013 under the headline “The Madam Who Turned to Stone.”

Now that we live just a few blocks away, it seemed rude not to visit the lady (skeleton) I’d read so much about. But Damnable proved surprisingly hard to find. The cemetery isn’t terribly big, but after five or six fruitless “maybe she’s over here!”-style wanders, I gave up and emailed Lake View. They were kind enough to send me a plot map with the relevant grave highlighted, and after a few missteps we found her! 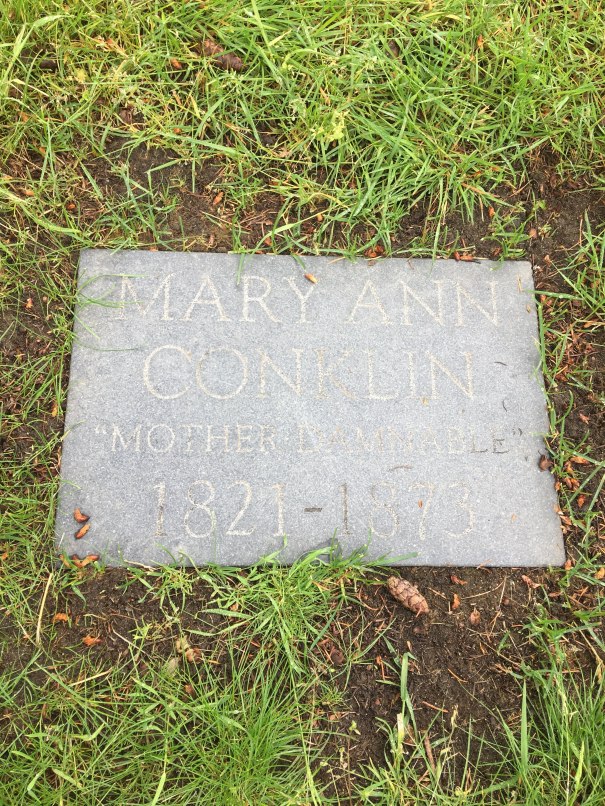 Sorry the lettering is so faded—it’s clearer if you visit. This is actually Mama Damnable’s second headstone at Lake View. The first was also quite plain, and said “Mother Damnable Conklin, died 1887”). You can see it on HistoryLink. That death date is incorrect—she died in 1873, the date listed above. The name Conklin comes from her first husband, a sea captain who abandoned her in Port Townsend. I believe is actually her third resting place, after she was moved from the old Seattle Cemetery downtown (now Denny Park) to Washelli cemetery (today’s Volunteer Park) and then to Lake View. May she rest in peace, free of irritating hotel guests and bad husbands forever.